​The below is a very useful wheel of smells (Ref. St.Croix Sensory Inc. color descriptors) that can help you to better remember terms for smells - and surprisingly this may enable you to better distinguish nuances in smells simply with better words to 'translate' them. 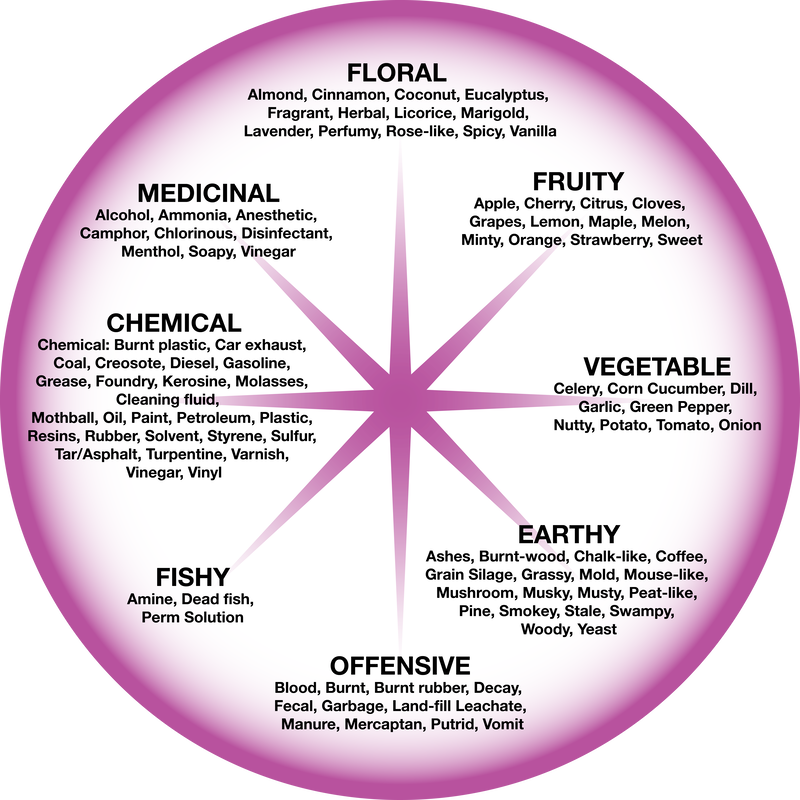 Smell is one of the most underrated of our senses. In numerous languages, words lack to define the large array of smells and odors that humans can detect. For lack of better words, we use words associated with our sense of taste. Further, the mental associations made with smells largely differ depending on our culture. For example in many asian countries, the smell of fish can be mouth-watering and appealing. In Europe, almost on the contrary, a 'fishy smell' has negative connotations. Reflecting these numerous issues, the classification of smells remains to day problematic.

In the same period, numerous scholars continue to enhance the work started: in  1855 Bain's Classification system: "The Senses and the Intellect"; Rimmel's classification 1875 - The Book of Perfume and Zwaardemakers System (1895) - Die Physiologie des Geruchs... This list continues (find here a related article on this topic) and suggests some form of consensus on the broad categories of smells but there does not seem to be a common / standard classification system universally agreed and used.

Thankfully, there is a lot of new information available. This is mostly thanks to the perfume industry. After its establishment in 1952, the Societe Technique des Parfumeurs de France developed a large list of detailed terms to describe smells of their perfumes. The growth of the perfume industry has generated important research and development in the science of smells. Perfume producers are able to decode the way individual molecules interact with the 350 olfactory receptors in the nose. This helps them to understand more precisely how humans discriminate odors to drive emotions and to design perfumes or other products sold to billions of people. The industry also conducts extensive targeted tests on consumers and in doing so have compiled interesting charts of terms that can be used in our area of botanical research.

Many other important other indicators contribute to the understanding of smells (frequency, intensity, threshold, duration...) but as a starting point, for field research and documentation of orchids, the figure above provides a simple but comprehensive set of terms and categories to describe smells.