Botanical research was interrupted and documentation lost during the Khmer Rouge regime.
Local orchid researchers currently lack capacities to fully describe orchids and there are no orchid experts in Cambodia able to determine species they discover. The local research is therefore highly dependent on the expertise of foreign experts.

Some of the first expeditions lead by the Royal University of Phnom Penh with Dr Hul Sovanmoly and Pr Marpha Telepova-Texier, were in the area of Kompong Speu (2003). Rapidly, research locations expanded. By 2013, research locations covered almost all provinces of Cambodia.

This map reveals the various locations where orchid research has taken place since 2003. 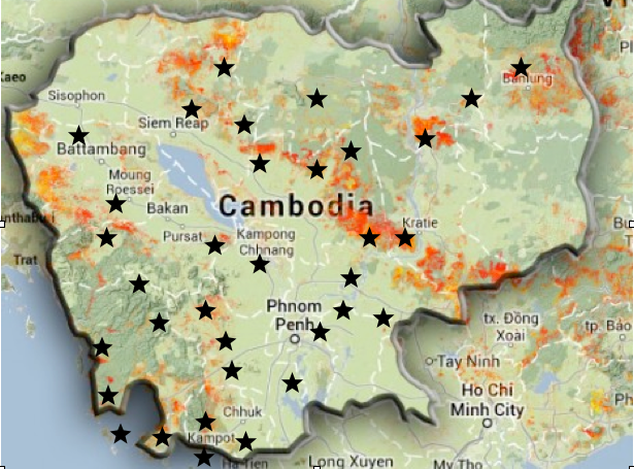 Adding to the efforts of the Natural History Museum of Paris, key orchid experts from various institutes have also build orchid knowledge. Notably, Kew Botanical Gardens recently helped Cambodian researchers to further expand this documentation. This most recent work contributed to confirm many findings made previously and to also list an important range of new species that were found in the period from 2010 to 2019.

With the establishment of a large greenhouse for the collection of wild orchids in the Forestry Administration in Phnom Penh, there are now expanded opportunities for researchers to build a national collection, to share findings and enrich our knowledge of the wild orchids of Cambodia.